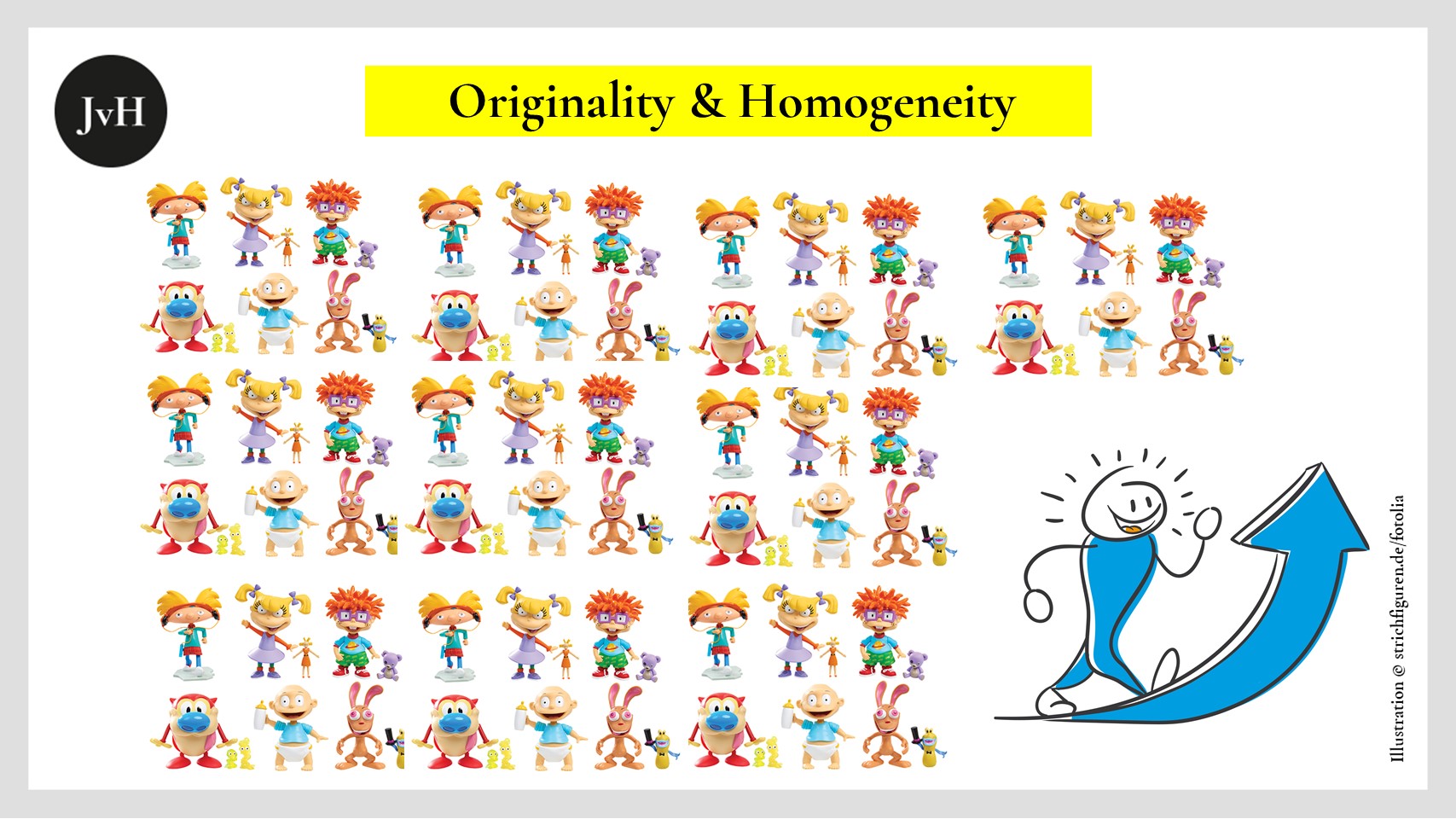 Nickelodeon Characters: With everybody striving for originality and uniqueness, everything turns homogenous

Individuals, who seemingly buck the trend and give themselves the air of unconventional, “brave” and, of course, politically incorrect opinionizing are a fairly common phenomenon: Officially, civic, political and business worlds alike are very liberal with praise for those kicking against the pricks, while, in reality, they endeavour to maximise homogenous mass behaviour and conformity. It is a phenomenon characteristic for capitalist societies in general, and western capitalist societies in particular. Many sociologists and philosophers in the succession of Theodor W. Adorno noted down valuable insights related to this phenomenon. So, I will abstain from adding another essentially superfluous footnote to this capitalist dialectic.

Unfortunately, one registers that such colourful attachment to the fabric of public life, i.e. of talk shows, speeches, events and western, “uncensured” social media also enter as embroidery of more elitist environments, as part of academic blogs, management literature and professional journals.

One particularly popular, allegedly original “thought” touches the “digitization” of our communication and claims, that “You + Me = Not Yet Us”. This is the title of an op. ed in Germanys weekly WirtschaftsWoche by management guru and “philosopher” Reinhard K. Sprenger, which recently got published as part of an anthology (Sprengers Spitzen) of the very author. The subtitle explains: “In times of digitalization, it is no longer enough to just work together. A plea for a culture of engagement for one another.”

Frankly I do not understand why it should be necessary to articulate such a “plea”, if digitization demands it anyway. But be this at it may, the argument entailed in this article is neither original nor valid anyway.

It is not original, because it was already voiced by that other guru Jeremy Rifkin, who enriched the world with his miraculous thought that “conventional economists overlook the fact that the laws of thermodynamics govern every economic activity […]. The collaborative Commons are already having a profound impact on the economy. Markets are beginning to give way to networks. Property is becoming increasingly less important than access to what is needed. Self-interest is mitigated by collaborative interests, and the traditional dream of bringing it from the poor guzzler to the billionaire is replaced by the new dream of a sustainable quality of life. As a new generation increasingly identifies with this >collaboratism< in the coming era, both capitalism and socialism will lose their once dominant influence on society […].” (Jeremy Rifkin, The Zero Marginal Cost Society, 2014)

I consider this to be utter drivel. It would presumably make Jürgen Habermas, the author of “The Theory of Communicative Action”, smile from ear to ear, but it is drivel nonetheless.

First of all, I refuse to acknowledge that in our day and age we have arrived at understanding “accurately” what exactly are the historically “objective” features of our time, as if we enjoyed the privilege of a bird’s eyes view while at the same time living on the planet. Historically this has never been possible and there is little evidence that would support the stance that it is now. Besides, there simply is no such thing as merely one accurate description of a time or a change of times. To simply assert that readiness for collaboration (which indeed appears to be both, a result of and a condition for digital one-on-one and one-on-many communication) which will eventually “evolve humans from acting against each other to acting for each other” (Sprenger) is ridiculous and empirically false. Right now, for instance, we can observe that many a successful software (or hardware) company backs away from open source and returns to secretive coding. Remember MakerBot?

Then, secondly, there is nothing whatsoever at hand reassuring us, that generation z is less egomaniac, more social, more “collaborative” in principle than the generations before. True, the objects of desire have changed: My kids can do without a driving license; I could not. In my generation and in that of my parents, holiday journeys, cars, real estate property etc. were considered privileges, today they are not, unless in vast quantities. Today you need to be a billionaire to be invited to travel with SpaceX. As for collaborative attitudes, helpfulness and a “culture for each other” I do not detect a thing. My kids are perfectly digital, but do they help mowing the lawn as an emanation of their collaborative minds (if there is no appropriate robot available)? Do they fill and empty the dish washer by themselves, clear the dining table, help cooking, arrange the laundry? Of course not. And it would be weird, if they would. Also, in our day and age we treat human workforce just as instrumental as ever. True, we are aware of human rights, we prohibit child labour etc. We do so, because we wish to avoid being treated badly by others ourselves. It’s Kant’s Categorical Imperative, Dude. Not more, not less. And that’s it. The instrumental approach of humans towards each other in working environments has not changed one bit.

Nobody can deny that we live through times of tremendous change. But nobody in his right mind may claim that he or she already knows where this change will eventually lead to and how it will change our human condition and our human behaviour. Science fiction is fiction, not science.