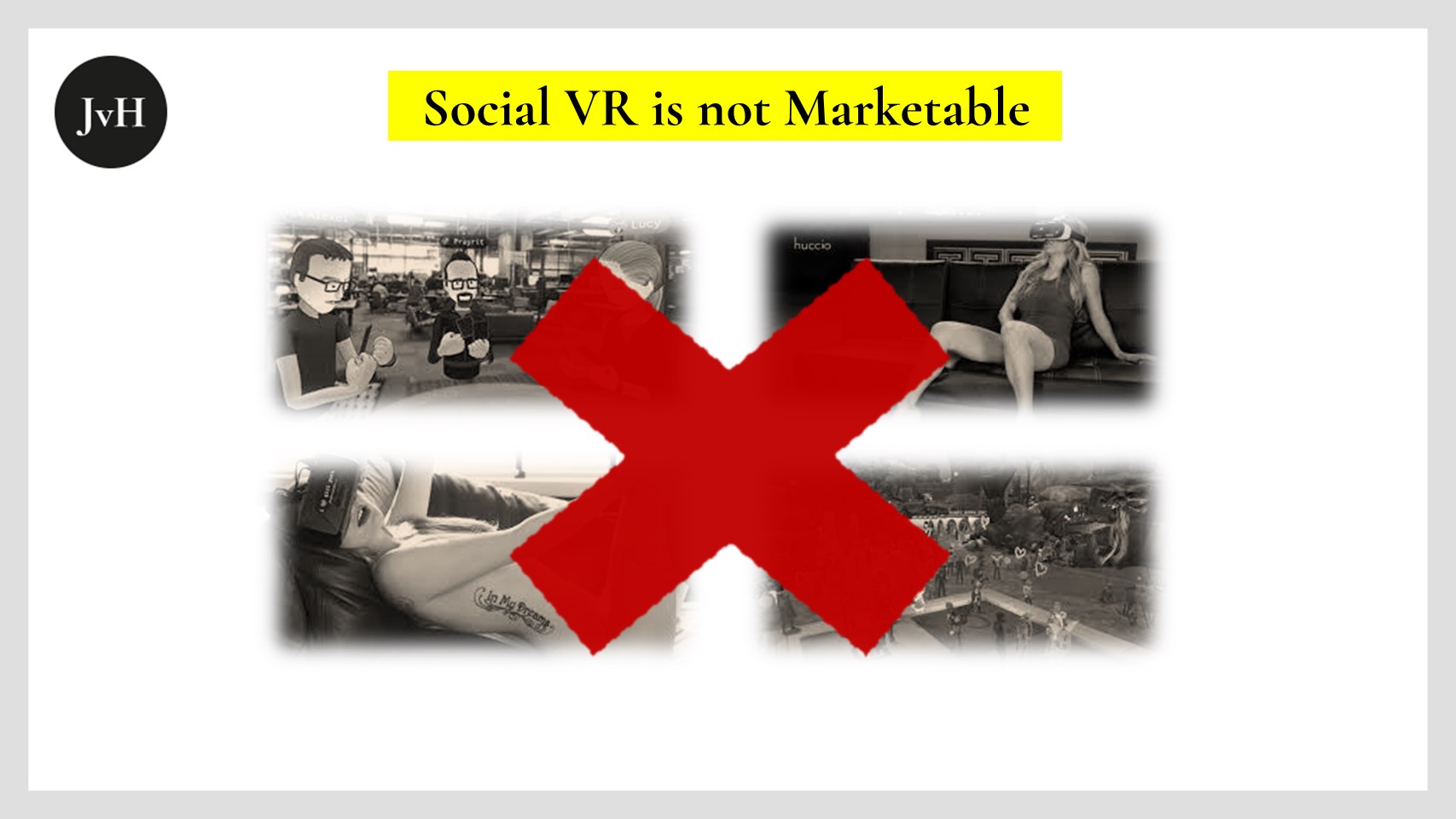 The idea of virtual reality (vr) is to feign “real reality” and to feign it so well that you will have trouble distinguishing the real real from the feigned real. This can be entertaining, entertainingly scary at times, and it can also be useful.

When a feigned reality is no longer a reality populated by, say, nature, buildings, or things like cars or machines, but by simulated “real” people, this vr is called “social vr”.

At present one can discern two different types of social vr: In one, the virtual humans are clearly avatars that may articulate themselves like real humans, but don’t look it. So, people from all continents may e.g. gather in a virtual room and communicate with one another “as if” they were actually sitting together in a real room. No matter what the purpose of such a situation may be, usually its e-learning, gaming or hanging out “together”, what you have got here is a genuine gaming situation with real people playing with their avatars and those of other real people. I call this the harmless version of social vr, even though, unlike Mark Zuckerberg, I don’t believe it will develop into anything big.

Who Likes to be Fooled?

If this type of social vr succeeded in deceiving humans, I’d call it dangerous. It would blur the line between reality and virtual reality in a fundamental way and the only point in doing so would be the intent to deceive. Imagine for instance virtual deal making or contracting. Or imagine celebrities and their agents earning billions by making fans believe their beloved stars would personally and individually interact with them. Mind you: This is fundamentally different from chat boxes and computer voices pretending to be call center attendants. As a customer I want my problem to be solved, and I don’t really care how this will come about. I will happily come to terms with something sounding or expressing itself like a human, even if he or she is not – provided “it” solves my issue. In deceptive social vr the purpose of the whole concept is my not being able to tell, if the person on my glasses or my screen is real or not.

Will this type of deceptive social vr succeed? Let us look at three different scenarios:

First, gaming: I am convinced what makes a game a good game is not how deceivingly similar it is modelled at real-life situations. What makes it good, is how entertaining, challenging and stimulating it is. None of these fun factors is a function of the corresponding realism. Sure, a game’s fun factor will increase, if some aspects of that game resemble reality: Monopoly is about deal making in real estate. Lego is about building houses, cities and machines. Apex Legends is about weapons. WoW is about almost everything. But none of these games is in any fully-fledged way resembling reality to the extent that you cannot distinguish anymore between reality and the game. Nor do they attempt to deceive. On the contrary: What makes these games entertaining, each in its own right, is that they are meant to be affirmatively unreal – taking me away from an at times perhaps not so pleasant reality.

Second, conferencing. We’ve already got phone conferencing and there is also video conferencing. Both are useful and they are sufficiently heavily frequented tools to have developed into industries in their own right. (It took them long, though.) But these tools have not made business class flights superfluous, have they? Humans need the smell, feel and touch, the immediacy of their fellow humans. They would certainly not want to deal with virtual blueprints instead, no matter how well those may have been programmed. In fact: The better the blueprint the less likely it would be that business people would want to engage with them. I would also not want to be hanging out twith any virtual, non-real copy of my pals. If I knew that the seemingly real person on the screen is an autonomously acting but virtual friend, the fun would be gone. As long as it is an avatar steered and controlled by my real pals, the first, non-feigning social vr version, things would be all right.

To sum it up: Real reality will always beat the deceptive kind of social vr. There simply is no need for it. And where there is no need, there won’t be sufficient demand. It won’t be marketable. Shall we bet?