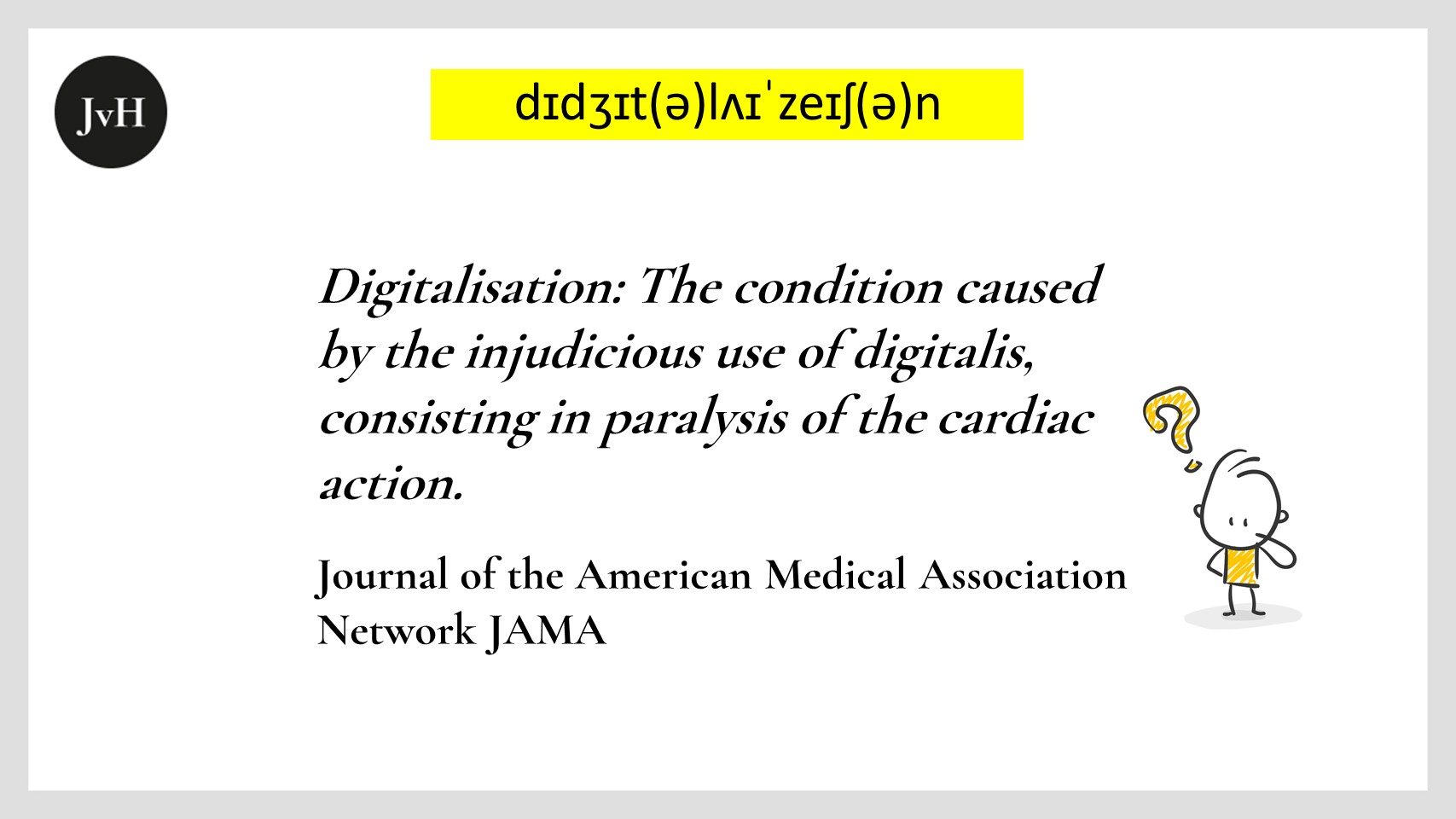 Ever heard a native speaker spell out “di-gi-ta-li-sa-tion”? I guess almost everybody has and almost everybody could have noticed then, that the syllable following the “l” gets somehow swallowed up the same way as the preceding “a” gets mumbled away.  The word does have a tongue twister capacity. This is presumably the main reason why people – unless they refer to the deadly plant digitalis, rather use the almost identical word and synonym “digitization”.

Be this as it may: What I find, personally, more interesting is that when we talk about converting hitherto “analogue” businesses, branches, societies and nations from a state of innocence into a state of savviness and not about converting analogue content into zeroes and ones, literally everybody apparently knows exactly what we are talking about and what the word digitalization means. Yet nobody ventures to define it.  In this transformative enterprise, academics and politicians operate as self-invoked Sherpas for society/societies while consultants do the same job for business/es.

Now, in my private and, rather unfortunately, also in parts of my professional life, I acquired a reputation as being a somewhat naïve fellow who is ready to believe whatever seemingly honest and learned creatures tell him to believe. I therefore would never have hesitated to believe an AA or BC or KPMG person, if she or he had ever informed me about the meaning and implications of transporting an “old industry” into the digital age. I would have fancied myself to be in a position similar to an elderly, somewhat frail and almost blind person being helped across the street by a kind, young and strong person with perfect eyesight.

Why? Because I must admit I fail to see the other end of the road. And, worse, I do not even clearly see the side where I am departing from: I do not know where digitalization will, let alone “should” lead me to, nor do I perceive, how digitally native or naïve, learned or unlearned my baby boomer generation and I myself actually are whilst already in the process of crossing that road.

Yet, from all that I have learned so far, actually nobody can really tell me for sure, how to cross the road, which obstacles to circumvent and which direction to take. To me it looks as if I might after all perhaps be not that alone and maybe not all that frail and blind and naïve as compared to my helpful pilots.

In business, in politics and in education things look pretty much alike: Nobody knows for sure what is what and what to do and what not. Some politicians e.g. say it was imperative to provide for tablets for every child in school, others say exactly the opposite. Do tablets and other mobile devices impede a child’s capacity to think, to concentrate and sustain concentration? Or does preventing children at an early age from engaging with these devices make them even more prone to succumb to their “dangers” later on in life? Which risk contains a bigger danger and which missed opportunities will have a greater detrimental effect? Nobody can tell, because, so far, nobody has got any reliable data to decide this quest. We are all literally on a journey into new “horizons” and should not pretend to know, how and where to cross the road.  This holds for business in exactly the same way: How “dangerous” is AI, machine learning, etc. and how useful are they? What, exactly,are they in the first place? Nobody knows. And if they did, they still could not tell what to do and what not.

Some academics and consultants suggest one could draw analogies from historical episodes or ages, compare e.g. the present “revolution (4.0)” to previous industrial revolutions (1.0-3.0). Intellectually stimulating this may be. But does it really help, if you simply cannot know in the midst of a process what kind of revolution you are actually in, if in any at all?

Celebrated British journalist Tim Harford (BBC/ Financial Times) recently published his new book  Fifty Inventions That Shaped the Modern Economy, where he points out amongst other things that it is not always the seemingly “big inventions” like Gutenberg’s printing press which change the world, but rather the oft forgotten less spectacular ones like the invention of the escalator, which, in retrospect, really transformed societies.