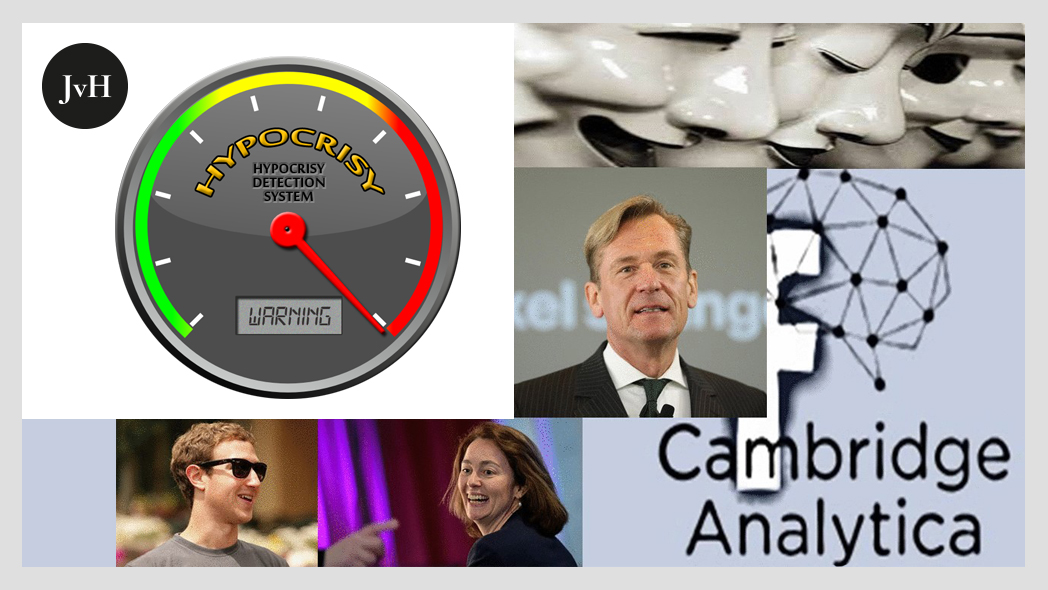 Okay. I really do not like social media in general or Facebook in particular. Not because of “data”. Also, not because of tax evasion, “ruthless lobbying” or quasi monopolies. These may be serious issues, but public authorities could be active in these fields if they wanted to. What I genuinely do hate is the way how social media i) corrode human thought or willingness to think and ii) discard content as commodity. “A picture is worth a thousand words” they say, but frankly, I deem a thousand well-chosen and well combined words to be ten thousand times worthier than an Instagram pic or a tweeted emoticon (or a Trump tweet for that matter). But this is my personal view. Appallingly old fashioned of course. Who cares!  If you can’t beat them, join them, is my motto. So, this is not my topic today.

My topic today is: Why does seemingly every politician and every publisher around the globe hypocritically attack Marc Zuckerberg and Facebook because fB did not ensure that its users’ social profiles were “kept safe”, i.e. unwillingly handed over to Cambridge Analytica.

Cambridge Analytica is an agent which among other things aims at servicing its clients with data and data analyses on groups of people. To that end it e.g. analyses social media profiles of Facebook users. From an ethical point of view this is exactly the same thing as gathering and analysing user data for advertising purposes. But they served no other ulterior purpose than to advertise the Republican Elephants electoral agenda. The harmed party was Facebook, who unwillingly provided data at the backend of an app. Facebook was harmed financially and contractually but NOT otherwise, NOT because Cambridge Analytica malused the data or inflicted a bad reputation on fB. Apart from Facebook nobody else got harmed. Facebook users know very well that their data are being used to help advertisers better target consumers. Users don’t pay with cash, they pay with data and they are generally fine with it. And if they are not, they shouldn’t be on Facebook.

To complain that the American presidential elections were quasi rigged because the American electorate was influenced by Cambridge Analytica is a ridiculous complaint. After all, you do not sanction advertisers because they are now capable to mass customize their messages, or do you? Is it criminal or even just immoral, unethical, if a conventional NYT ad manages to target my personal interest, because the copywriter of its ad agency or media agency managed to anticipate what an “awfully” liberal person I am? What Cambridge Analytica did might be technically more sophisticated, content wise richer and thus more effective. But ethically speaking it is exactly the same thing. Trying to influence the electorate is something perfectly legitimate and has been done back in the days of the first public and free elections. It is and was even necessary. And it has nothing to do with “algorithms”.

So, when Germany’s new justice minister yesterday talked to Facebook’s European Management in Berlin it was nothing but window dressing, just as Zuckerberg’s ostentatious and melodramatic remorse. The minister wants to address the “transparency of Facebook’s algorithms”. What a joke. This is hypocrisy at its best on all sides: Facebook needs its (“dumb*ss”) users’ trust (therefore the remorse act); European authorities need to collect more taxes and European publishers need to contain social media giants. That’s what it’s all about.