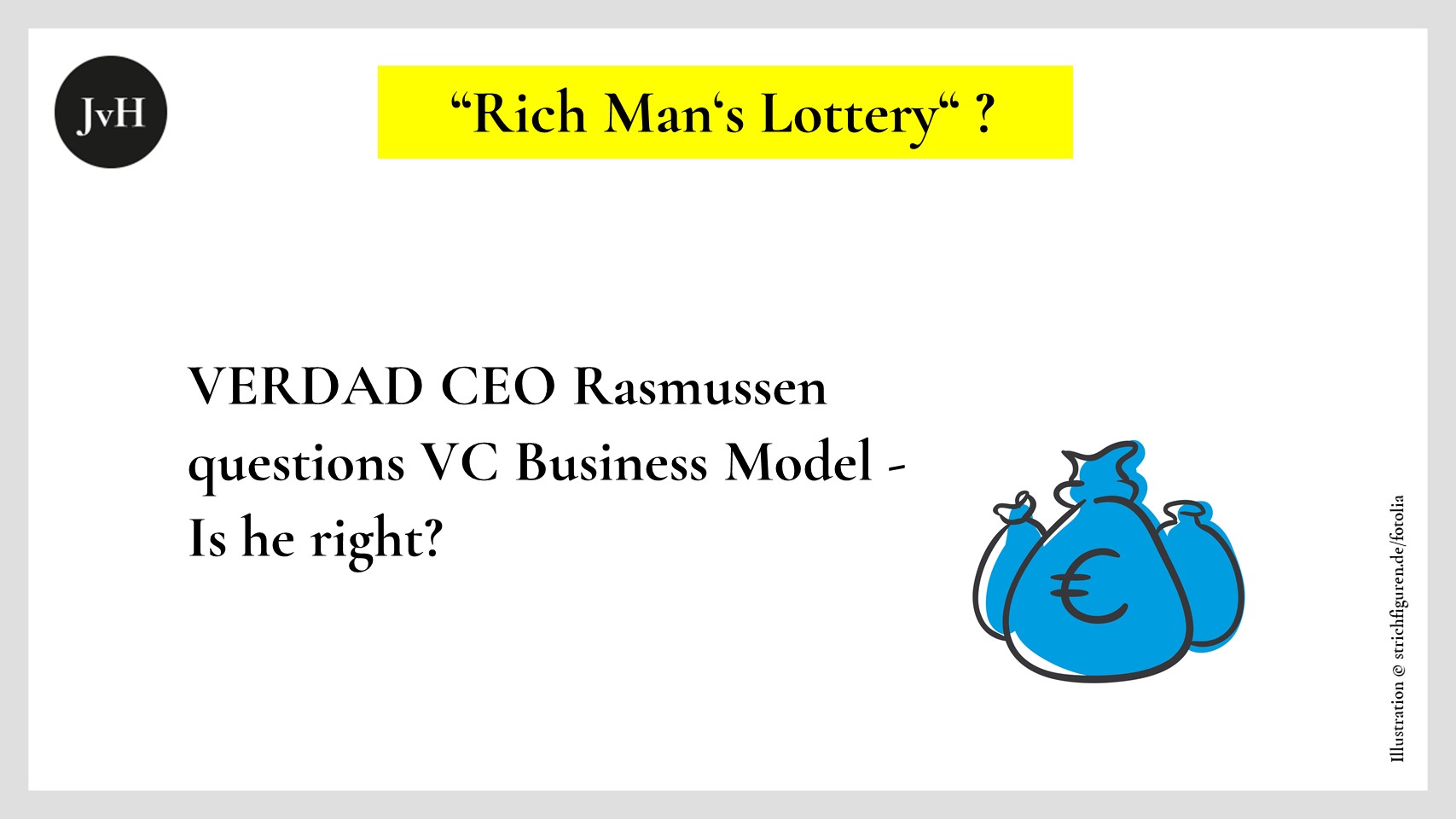 Verdad Capital founder and (small cap) public equity crusader Dan Rasmussen recently published a report authored by his last summer Harvard intern Blake Patterson. The melody of the article matches Rasmussen’s bias towards public – and his highly critical attitude towards private equities as reported this week among other sources by the NY Times.

The newsletter report The Lure of Venture Capital attacks the asset class venture capital which according to Rasmussen is not only less transparent and more illiquid but also – consistently – underperforming when compared to S&P 500, Nasdaq and Russell 2000: “Cambridge Associates data shows that venture has underperformed public equity benchmarks on a three-year, five-year, 10-year, and 15-year horizon.”

One may speculate that Rasmussen is frustrated by the incredible appeal private equity, and venture capital enjoy these days around the globe: “[European] venture capital investment increased by 34% to a ten year high of € 6.4 bn surpassing 2008’ s amount by 13%. Nearly 3,800 European companies were venture backed. Seed and start-up investments [in Europe alone] grew almost 50%.” (source: Invest Europe, 2017 European Private Equity Activity). This almost fades away when compared to America’s VC landscape: ”Deal Activity looks to be resurgent with $ 23B invested in VC-backed startups setting a new quarterly funding high since the start of this century, while also increasing activity to over 1,400 deals.” (Tom Ciccolella, PwC, CB Insights/ PwC Money TreeTM Report Q2 2018). Or Asia:” Total quarterly funding to Asia-based companies increased 10% in Q2 ´18 as US$ 21.2B was invested across 1,300 deals. Deals increased by 36% from the prior quarter to 1,300”. (ibid.)

Now, questioning Rasmussen’s motives is one thing. Criticizing the quality of his judgement is an altogether different one. So: Does he have a point?

Rasmussen and Patterson may have a point, if you look at the private equity scene as a whole. It is true, for instance, that “on a one-year horizon, private equity funds reported a 19.1% IRR”, which is meek by any standard. (PitchBook, Global PE & VC Report 2018 (Data as of 2Q, 2017)

However, average or median performance of the whole venture branch as compared to just S&P 500 or Nasdaq or Russell 2000 is no fair comparison. If instead of looking at all venture capital funds one takes a look at the top quartile of VC funds the balance clearly tilts towards venture capital. A sample of the best global and American funds is available at Preqin’s .

These funds achieve net IRRs in the region between 50 and 100. The majority focusses on Asian targets and their size is comparatively small. That’s why investors now have to pay an “access premium” if they want to enjoy such amazing returns.

What does this tell us about venture investments sui generis? Remember 2002 Nobel Laureate Daniel Kahneman:

“Venture capitalists want to predict the extreme cases correctly, even if they have to put up with overestimating the chances of success of many other start-ups.” (Kahneman, Thinking, Fast and Slow, Strauss & Giroux, NY 2011)

With this strategy funds will land extraordinary successes, yes. But only once in a blue moon. It is no strategy for consistent success and thus indeed one deserings to be epitomized: “Rich man’s lottery”.

But this avenue is not the only viable one. Some venture funds have been consistently successful. Not in these extreme regions of IRR 100+. But certainly, better than S&P 500, Russell 2000 and Nasdaq.