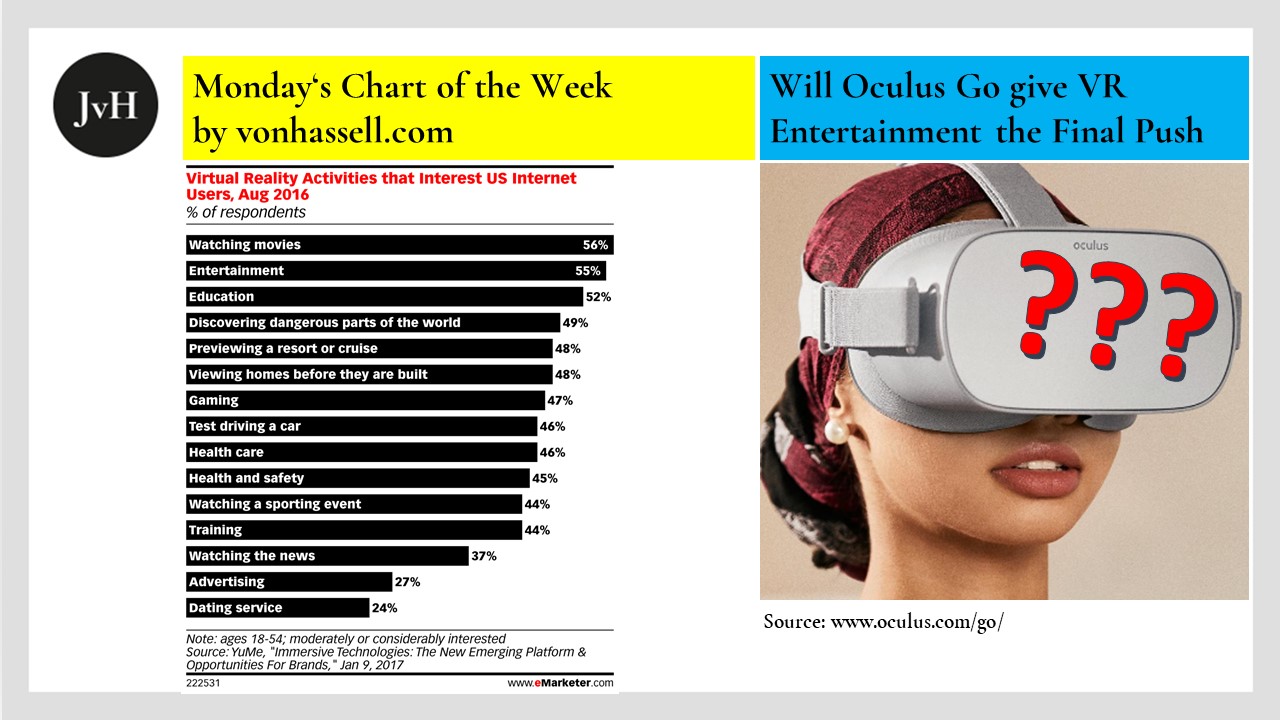 Will Oculus Go give VR Entertainment the Final Push?

I just learned that Zuck’s Oculus Go, which will hit the market today, may finally allow Facebook to also arrive in the hardware world. Apart from a super reduced user interface, prime visual performance and, yes, price, Oculus Go achieves what made Apple great as well: combining excellent hard & software with good and more or less mutually exclusive content (via Samsung).

Yet, having been active in the 3D and VR content world myself I remain deeply sceptic.

Mind boggling and breath-taking many a VR content certainly is. But will it last? Does everybody rush into 3D films and leave 2-D to the side? Is it the same thing to meet my friends in a virtual movie theatre or living room and watch a movie together as to doing this together with real drinks and real crisps and physically really present friends? I don’t think so. Let us not forget: Our standard perception of the world is based on seven senses and not just three dimensions. Researchers are making progress with including touch into the VR game “panorama”. But frankly I do not see how they will cope with smell…

Besides, “it’s all in the head, dude.” The best films and worst nightmares are always being shown in our respective minds. And inside our heads, your and my movies are 3D (and VR) anyway. To arrive at a really “all-pervasive” sensory event, imagination remains a necessary compound to fill the sensory gaps that no 2-D or 3D can possibly fill. Thus, exciting as 3D and VR may be at their inception, it really does not make that much of a difference in the end, whether I watch or play a VR, 3D or 2-D application.

As for market perspectives, 3D and VR on the one hand and 2-D entertainment on the other are clearly playing a zero-sum game. In the long run 3D/ VR will replace most of 2-D applications, I am sure. But a Blue Ocean 3D entertainment is not. And even the disruption of the old 2-D-Red Ocean will come about in slow motion. Because 3D and VR entertainment are nice-to-have, but must-haves they are not.